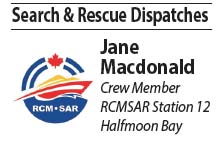 When pagers sounded on Sunday evening (July 9) at 11:22 p.m. RCM SAR Station 12 members were notified of a Code 2 (Pan Pan call for help) for our inside vessel located at Porpoise Bay. No matter the hour, a Coxswain and two crew members responded to a campsite at Nine Mile Point where two separate groups of campers requested emergency evacuation due to an aggressive cougar who was stalking them.

Normally an idyllic campsite, the seasoned kayakers and experienced outdoor enthusiasts grew increasingly nervous after sunset when an agitated cougar appeared and would not retreat after several attempts to scare it away.  With young children in one of the camping parties, the responsible adults called for help and elected to give nature its space.  All supplies and camp materials were left for retrieval the next day due to the proximity of the angry feline, which can be a formidable hunter.

The visibly shaken and nervous campers experienced difficulty contacting water taxi or animal control assistance, due to the time of night and spotty cell phone reception.  A call came to Joint Rescue Coordination Centre, likely via 911 emergency call referral, which relayed the emergency location and situation to our local volunteer crew in Porpoise Bay. After boarding six adults and three children on RCM SAR’s swift response vessel and ensuring everyone had lifejackets, the crew transported the upset campers to safety for the remainder of the evening.

A number of sheepish apologies for calling were offered by the campers; there is no need to ever apologize for needing help, as that is why the Royal Canadian Marine Search and Rescue exists.  Saving lives on the water and helping to prevent accidents is what the crews of volunteers train for all year.  The Sunshine Coast has three volunteer-staffed Marine Search and Rescue stations which respond to boater (including kayak and stand up paddleboard) emergencies 24 hours a day, 7 days per week; Station 14 in Gibsons, Station 12 in Halfmoon Bay / Porpoise Bay and Station 61 in Pender Harbour.

All marine campers and boaters are encouraged to travel with a functioning VHF radio, where Channel 16 should be used to convey emergencies.  If coverage is available, distressed boaters can call *16 on mobile phones to call for help.  RCM-SAR will respond, no matter the hour or situation without judgment or penalty; it is what we do.

June’s Crew Member of the Month

Erin has been an RCMSAR 12 member for 1.8 years. In this short time, she has gained 557 total hours of volunteer service, which includes 117 hours of sea time. In the fall, Erin attended and was successful at SARNAV 1 and also received her SVOP (Small Vessel Operator Proficiency) certification. She has also completed her MED A3, Flood and Swiftwater Awareness Course and is a certified Pleasure Craft Safety Checker.

This past year, Erin was a co training officer for Station 12 – ensuring that training was top notch, covering all of the lessons to assist new crew to get out on the water and become the best they can be!

Erin’s hard work, dedication, bubbly attitude, knowledge of SAR operations and boat handling skills has paid off – she will be heading to RHIOT (Rigid Hull Inflatable Operator Training) school in February in Bamfield, ready to crush it, as she always does! Bravo Zulu, Erin!